[Can you tell me what you think?]

"Strong willed and forceful, Shizune is definitely the leader type. She’s been the class rep, despite being deaf and mute, for as long as her class has had one, and generally takes charge in just about any situation she’s placed in. Shizune is known around the school as a fearsome taskmaster, and skilled manipulator, but also as a fair and just leader."
— Official Description

Shizune Hakamichi (羽加道 静音, Hakamichi Shizune) is the class representative of Class 3-3 at Yamaku Academy, as well as the president of the Student Council. She is deaf, and as such, uses sign language to communicate (however Misha is often used as her interpreter). She is very diligent when it comes to her work, and does not appreciate people around her slacking off or shirking their duties. She is very strict towards others, in contrast to Lilly Satou (Shizune's fellow class representative of 3-2 and cousin). 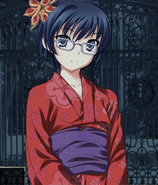 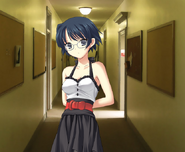 Shizune has short dark blue hair and dark blue eyes. She usually wears a pair of grey glasses that she rarely takes off, a gold wristwatch, dark blue thigh-high socks, and black shoes with a strap decorated with a red rose.

She is often seen wearing her school uniform, which is described as tight on her. However, she is also seen wearing two other outfits as well - both of which are described as mature and well-thought-out by Hisao. The first is a yukata that is a vivid and deep red with faded white flowers and a purple bow which she wore to the Tanabata Festival with Hisao and Misha. With the yukata, she wore a light bronze hair pin which was of a decorative flower. Although rather large, it featured red jewels embedded for petals giving off elegance and beauty. The second outfit she wore, was a long white and black dress complete with a red belt running across her mid-section. The dress had three buttons along the center as well as black straps which Shizune has tied into a bow behind her neck. She wore this when she went back home to Saitama.

Shizune's appearance and aura gives off the impression that she is serious and all business, but Shizune can be quite childish sometimes. For example, she has once argued over the flavor of shaved ice; however, this was only ignited due to her fiercely competitive spirit which often makes her create contests or challenges out of anything, even if it doesn't make much sense to do so. Shizune also possesses natural leadership qualities, making her punctual, precise, and very proactive. But note that Shizune actually doesn't like being a leader, she just likes responsibility. And another thing to note, is that Shizune can be quite blunt and direct with the things she says or with the orders she gives. This is because Shizune wants to make as little mistakes as possible.

Being Deaf plays a grand role in Shizune's personality, spawning a few quirks and traits. Firstly, Shizune is not able to hide her emotions easily, and often wears emotions plainly on her face despite her best efforts. Because of this too, she blushes easily when being teased. Next, she has a very sharp focus. She often plays with her glasses and stares at people analytically as if planning something, but really, she only does this mostly to fully understand a conversation. Being analytical and focused, she can be witty and clever. To the point where it seems that every word she says has some kind of agenda attached to it or behind it.

Despite being focused, self-sufficient, and precise, Shizune is sensitive. She would attempt to hide any mistakes she made and fight her own battles until they become too much for her to bear. Shizune doesn't hide emotions easily, but she does hide how events have affected her; as she has a loose professional way of living life and upholding herself.

Akira Satou - Shizune and Akira are cousins and get along with each other. The two have a history together as well, but not many details are known.

Hideaki Hakamichi - Shizune and Hideaki get along, but sibling rivalry does exist between them. Hideaki shares Shizune's competitive drive, which often has them competing over nothing. Shizune upholds her older-sister role when it comes to managing Hideaki, although communication between the two is difficult as Hideaki does not know sign language. The siblings share some hobbies as well, the main being fishing, but both are seen to be good at board games.

Jigoro Hakamichi - Shizune resents her father and talks back to him even though he doesn't even know sign language. She is able to imitate her father, and enjoys making fun of him.

Shiina Mikado (a.k.a. Misha) - Shizune's best friend and interpreter. Misha met Shizune at the beginning of her freshman year. Misha knew little sign language then, but just enough for the two become friends. They have been friends ever since, however eventually Misha developed a crush on Shizune. Misha would confess in the Student Council room, only to have Shizune rebuff her feelings causing serious conflict later in the route. All throughout her arc, Shizune notes that she doesn't give Misha enough credit for being such an asset to her. In fact, Misha's grades slipped due to her persistence to be with Shizune and help her. And although the two rarely fight, the chosen ending determines whether or not Shizune and Misha continue to be friends after graduation.

Lilly Satou - Shizune is not very fond of Lilly, often arguing with her whenever they meet. Lilly describes Shizune as pushy, rude, and scary while Shizune thinks Lilly is selfish and lazy. In the past, both were once in Student Council before Shizune "scared off" the rest of the members, leaving just herself and Misha. The two are cousins, and It is worth noting that the two do respect each other highly despite everything.

Akio Mutou - As Student Council President and as an ambitious student, Shizune is on good terms with her teacher.

Yuuko Shirakawa - Shizune sees Yuuko often at the Shanghai as well as the Yamaku Library; she is a regular in both locations. As a result, the two have a mutual if not good relationship.