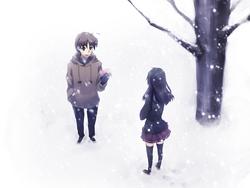 Having received a secret message, Hisao meets its sender, Iwanako, in a wintry forest. After exchanging pleasantries, Hisao's heart starts to beat harder, but he dismisses it as nervousness. The symptoms grow worse and he passes out in the snow as Iwanako makes her love confession.

Hisao spends the next four months in the hospital, during which he becomes numb and distant. Iwanako visits, but eventually stops coming. When his recuperation is finished, the doctor delivers a list of medications, which makes Hisao sick with anger.

The doctor also suggests that he not return to his old school. Instead, he suggests Yamaku Academy -- a school designed for disabled students with 24-hour nursing staff. Hisao reacts cynically, considering it a step down. But he decides having a fresh start may not be such a bad thing.

Retrieved from "https://katawashoujo.fandom.com/wiki/Prologue?oldid=15242"
Community content is available under CC-BY-SA unless otherwise noted.