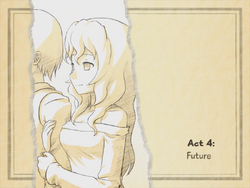 Act 4: Future is the fourth and final act on Lilly's route.

One day until exams, but Shizune and Misha are more interested in what happened to Hisao and Lilly over the holiday. He admits that they are dating. Misha seems happy enough, but Shizune reacts surprised. He and Lilly eat lunch in the Tea Room, reaffirming their mutual -love. Later, they have a homecoming party in Lilly's room, with Akira and Hanako. Hanako reveals that she has joined the newspaper club, a welcome sign of her social development.

Later that week Hisao visits the nurse to discuss what happened in Hokkaido and leaves with some reassurance and advice. He and Lilly go to the convenience store and they bump into Akira along the way. She shows Hisao a photo of Lilly, Shizune, and Misha (with uncolored hair), working together at the previous Yamaku festival. Akira then tells Hisao she's leaving for Scotland soon, possibly for good. Lilly, already aware of this, becomes greatly subdued.

On Sunday evening, Hisao takes Lilly to dinner at a fancy European restaurant. Lilly mentions that she previously went to a wealthy, all-girls Catholic school. Despite this, several boys had confessed to her in the past. Hisao (depending on choice) tells her about Iwanako. Lilly reveals that, in middle school, she had a crush on her English teacher but never acted on it because of the social taboos. They both finish their meal and Lilly accepts the bill, saying that though she dislikes throwing money around, she'll make an exception for the special moment.

During an evening tea party Hisao, Hanako talks about plans to travel over summer with some members of the newspaper club. Hisao tells Lilly he plans to become a science teacher. After Hanako leaves, he asks Lilly if her blindness will affect her teaching. Lilly proves she will be fine by blindfolding Hisao and making him search for her. One thing leads to another and the two have sex, Hisao still wearing the blindfold. But Hisao overexerts himself. Fortunately he recovers and the two manage a moment of peace. However Hisao feels Lilly growing more distant despite their relationship.

Hisao receives a call from Akira to meet her in the park. Akira talks about her resentment toward family, that they were rarely around for her and Lilly. She reveals that, while away, Lilly's family invited her to join them in Scotland. Odds are if she leaves, Lilly and Hisao will be unable to maintain their relationship. Hisao confronts Lilly about this on their date at the Shanghai. Lilly tells him that she plans to leave shortly after summer holidays begin. Hisao realizes how utterly futile their relationship was.

The day of departure arrives. Hisao voluntarily helps Misha and Shizune in the Student Council office. Lilly joins them one the last time, making a touching moment between cousins. After packing her things, the two of them meet Hanako and Akira front of the school gates. Lilly consoles Hanako and promises to keep in contact with her, and Hisao reminds her that she has her own life to lead. The Satous depart and while Hisao and Hanako prepare to move on, both are aware that something irreplaceable in their lives is now gone.

If Hisao was forthcoming and honest with Lilly in his choices, Hisao lays in his room, holding the paper crane Lilly had given him. He realizes how much he became dependent on her, yet failed to ever ease her burdens. Suddenly, Hisao gets up, determined to catch Lilly before she leaves. He takes a taxi to the Hakamichi residence, hoping they haven't left yet. Hideaki greets him, meaning they have already gone. However, he points out they only left recently and points in the direction of the airport. The taxi rushes to the airport. Hisao struggles through the crowds. Just as he spots her and Akira, his heart begins to fail. Hisao collapses, alarming various bystanders, and everything goes black.

Two days later, Hisao awakens in the hospital. The doctor explains that the attack wasn't as severe as the first, but he has had keyhole surgery to install a temporary pacemaker. With despair and angst at having ended up in a hospital again, Hisao falls sleeps. He awakens to the sound of the music box he had given Lilly beside his bed. Lilly enters the room and emotionally breaks down. Hisao apologizes to Lilly for failing her and asks Lilly to stay in Japan. The two promise to go to the next year's Tanabata festival together.

Some time later, Hisao is out of the hospital and sitting with Lilly and Akira on a hill near Yamaku. Akira plans to go to Scotland, but Lilly intends to say. After Akira leaves, Hisao and Lilly return to Yamaku, ready to face their future together.

Retrieved from "https://katawashoujo.fandom.com/wiki/Act_4_-_Future?oldid=16042"
Community content is available under CC-BY-SA unless otherwise noted.