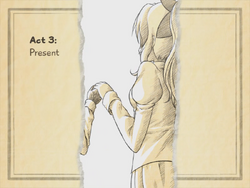 Act 3: Present is the third act on Lilly's route.

The days following Lilly's departure pass. Hisao asks Shizune about the conflict between her and Lilly. She coldly advises him to ask Lilly herself when she returns. Mutou interrogates Hisao on his plans after graduation, forcing him to confront the fact that he must plan for his future. Hisao wafflingly declares an interest in the sciences.

After class Hisao takes some papers to Hanako who was absent from class. Her failure to respond concerns Hisao, and increases when she is absent the next day. Worried, Hisao calls Lilly in Scotland for advice. She explains that today is Hanako's birthday, which is also around the time of year when her parents died. The same thing happened last year, and she regrets she can't be of more help. When Hisao prepares to hang up, she seems disappointed. Only afterward he realizes she expected him to call to talk to her, not about Hanako.

Hanako returns to class a few days later, back to normal. Reassured by this, and a "relationship talk" with Yuuko in the library Hisao calls Lilly in Scotland. The two enjoy some small talk before Hisao tells Lilly that he misses her. Lilly replies in kind, affirming their mutual affection.

Hisao and Hanako meet Lilly and Akira at the airport. Since the Yamaku students have three days off from school Lilly invites Hisao & Hanako to her family's summer home in Hokkaido. Early the next day, the trio boards the early morning train to Hokkaido and arrive at the small summerhouse. As they spend time together, Hisao realizes he is in love with Lilly, and wonders when he should confess it. The trio decides to go into town, a mile and a half walk. Not long before starting, Hisao has an acute heart murmur. He suddenly realizes he forgot to take his medications yesterday. It passes, but the three return to the house.

After waking, he finds Lilly standing outside, alone. Lilly's calm demeanor cracks when she confesses her love for him. Hisao returns her feelings. Later they return to the house and as they talk Lilly insists that Hisao not apologize for his weak heart, as she does not apologize for her blindness. After some tentative invitation from Lilly the new couple make love.

Worried how this may affect Hanako, they sit her down and tell her of their new relationship. Hanako reacts with reservedness, but elation. Later that day, Hisao takes a bath, but is interrupted by Lilly. The two bathe each other and end up having sex again. On the trip home Hisao realizes how much they've all come to depend so much on each other and wonders what they will do after graduation.

Retrieved from "https://katawashoujo.fandom.com/wiki/Act_3_-_Present?oldid=17379"
Community content is available under CC-BY-SA unless otherwise noted.