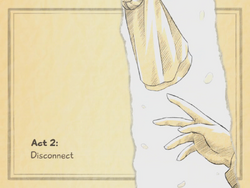 Act 2: Disconnect is the second act on Rin's route.

The next day, Emi collides with Hisao once again, this time bringing papers to a teacher. To apologize, she invites Hisao for lunch on the rooftop again. When Hisao arrives, Rin is lying on the roof, watching the sky. She tells him that sometimes she skips classes to experience things she wishes. Hisao joins her and finds himself relaxing, his thoughts slowing down to calmly drift by like the clouds.

At his first art club meeting, the first assignment is to partner up to practice sketching one another. Hisao is left with Rin, the only other person he knows. His own artwork is clumsy, but Rin's is amazing. When asked about the gloomy expression on his portrait, she answers that she's never seen him smile. Hisao starts to reflect on his negative outlook on life since his heart attack.

Later, after another art club session, Nomiya tells Rin about a friend of his who might be willing to display some of Rin's work. Rin says she'll think about it and goes for a walk, which Hisao accompanies her on. They stop at a large maple tree which Rin calls the Worry Tree. Rin feels that, to display her work for others, she'd need to become an entirely different person. She isn't sure whether becoming a career artist is something she wants for herself. Hisao shares with Rin his own negative feelings towards the circumstances that lead him to Yamaku, but resolves to stop "wallowing under the weight of all the crap in his life" and change for the better.

Hisao receives a letter from Iwanako, in which she hopes he's gotten back to his feet in his new life. Resolved to change, Hisao observes other students and how they cope with their difficulties. When Rin paints, she goes into her own world that he cannot breach. To her, painting is a way of capturing what she cannot say. Looking at her old paintings reminds her of what she was thinking at the time she made them, and are proof of her existence. She fears she cannot become the person that Nomiya wants her to be.

Emi makes good on her promise to celebrate finishing her track meet and the three head out for a picnic. However it begins to rain and they are forced to wait out the storm in the Shanghai. Emi decides to hike back in the rain, but knowing he can't keep up, Hisao walks Rin back with his umbrella. The next day, Emi is absent from lunch due to a cold, and Rin mentions that she might have it too. She sneezes suddenly and Hisao helps wipe her nose with his handkerchief. She hugs him (in her own way) and leaves as lunch ends.

Hisao bumps into Emi a few days later who sheepishly tells him Rin caught her cold. It takes a few days for Hisao to work up the courage to visit Rin, but when he does, Rin answers the door in an unbuttoned shirt and underwear. Speaking very strangely, Hisao figures out that she's taken too much codiene-based cold medicine. As he's about to leave, she falls into him and kisses him on the lips. A bewildered Hisao tucks her in, pondering whether to call a nurse, and pockets the rest of her medication.

The next day Rin waits outside Hisao's classroom with no recollection of previous day's events. But she does recall wanting to bring him somewhere, so they walk through the forest to a dandelion-covered hill. Rin apologizes for being so bad with people and confides that her pencils and paints are the only friends she's ever had. Hisao declares that he's her friend. Rin announces that she'll give the gallery a try, realizing change was inevitable so she might as well embrace the opportunity.

Retrieved from "https://katawashoujo.fandom.com/wiki/Act_2_-_Disconnect?oldid=17459"
Community content is available under CC-BY-SA unless otherwise noted.