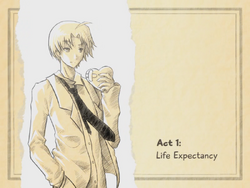 Act 1 - Life Expectancy is the first "gameplay scenario" of Katawa Shoujo. While Hisao adjusts to his new school and new health condition, he meets the various students at Yamaku, including the five girls he can have a relationship with: Shizune, Lilly, Hanako, Emi, and Rin. The entire takes place over the course of a week -- Monday to Sunday -- ending on the school festival, when Hisao realizes he has feelings for whichever girl the player has favored.

Unlike Acts Two through Four, which stay fairly linear on the character's path, Act 1 can vary widely depending on which choices the player makes. In some cases, the entire Saturday is spent with one girl at a tea shop. In others, Hisao can meet each girl in a single day. The available choices and paths are entirely dependent on Hisao's choices, which influence variables within the code representing his interest in each girl at any given time. However, there are certain constants, and certain scenes which always show up, no matter which choice is taken.

On arrival at Yamaku, Hisao meets his new homeroom teacher, Mutou, in the lobby. Mutou takes him to class where he meets Shizune, a deaf girl with glasses who is the class representative, and Misha, her interpreter. They enthusiastically welcome him and take him to lunch. However, they have important things to do, so they drop him off at the Nurse for an introduction. At the end of the day, Hisao returns to his dorm, and encounters his hallmate, Kenji, a nearly blind boy who is obsessed with feminist conspiracy theories. Seeing that his parents have unpacked his things, Hisao takes his medication and falls asleep in the unfamiliar room.

In class, Shizune and Misha explain that everyone is focused on the school festival at the end of the week. A shy girl with half of her face scarred leaves class suddenly, piquing Hisao's curiosity. At lunch, Hisao asks about clubs he can join. Shizune and Misha list off some, heavily encouraging Student Council, which they are a part of (in fact, they are the only members). Shizune then challenges him to a game of Risk in the Student Council room after school. She wins, using the victory to again prompt Hisao to join Student Council. Hisao tells them he'll consider it, then leaves for the library before it closes.

After getting lost, he accidentally enters a tea room where a blind woman named Lilly is enjoying some peace and quiet. They have a little tea, then Lilly guides him to the library. While she talks to the librarian, Yuuko, about some new braille books, Hisao goes looking for a new novel. While wandering the shelves, he finds the scarred girl, sitting quietly and reading. Hisao introduces herself to the jumpy girl, whose name he learns is Hanako. After a short conversation, she suddenly excuses herself. Befuddled, Hisao takes his leave back to his dorm, where Kenji encounters him again. Kenji holds Hisao up, ranting how the school is a "site of feminist infiltration", before he can escape to his room.

Shizune and Misha pester Hisao about Student Council. He dodges the question and asks about Hanako. They evade the question, telling him that he wouldn't get along with her. While Hisao ponders this, Shizune and Misha argue about where to eat for lunch. At this point, Hisao can either wait for them to finish, ignore them and read his book, or go talk to Hanako.

No matter which option, on the way to the chosen destination, a girl with twin pigtails running in the halls crashes into Hisao. At first, Hisao is scared for his heart, remembering his cardiologist's warning to "not get hit in the chest". The girl, Emi Ibarazaki, uses prothetic running blades, as she had her natural legs amputated below the knee. (If Shizune is with him, she scolds her for running in the halls.) She apologizes profusely and then runs off again.

If Hisao talks to Hanako, they head to the tea room where they have a very proper lunch. Lilly talks about how she and Hanako met. After lunch, Hisao tells Mutou about having trouble talking to people with disabilities. Mutou assures him that things are only an issue if he makes them one. Misha interrupts, looking for plywood for the festival stall they are building.

If Hisao follows Shizune, she decides to go into town, inviting him along. They enter a fancy teashop called the Shanghai where Yuuko Shirakawa, the librarian, works part time. Once again, Shizune and Misha use the outing as an opportunity to manipulate Hisao into joining the Student Council.

Either way, Misha asks him to help her find supplies for the upcoming festival. Hisao enters the art room and sees a girl with short hair eating a late lunch. The girl has no arms, so she holds her fork between her toes. He learns her name is Rin, and that she has been working on a large mural for the festival. Her philosophical and abstract way of talking makes conversation difficult, so Hisao decides to just go about his business. When Hisao takes his leave, she lays out on a table to take a nap. Once outside the door, Hisao runs into Shizune and Misha. They scold Rin for misusing school property (though Rin doesn't seem to care), and question Hisao suspiciously as to the reason for his lateness.

Rin asks Hisao to help her carry some green paint down to the mural. They run into the nurse, who confronts Hisao about his lack of exercise. Hisao asks him how he knows and he confesses to using "a spy" to keep tabs on him.

At the mural, Hisao helps Rin by mixing paint colors, though he can never quite get them right. Rin focuses on her painting, occasionally making confusing comments, but most of their time is spent in silence. Eventually, it gets too late to continue.

Early in the morning, Hisao goes to the track to jog and finds Emi. Afterwards, Hisao goes back to his dorm to shower. Kenji interrupts to ask for money, to which Hisao agrees just to get rid of him, then goes to class.

Before the bell, Lilly stops by, looking for Hanako. Shizune and Misha arrive at the same time, and a fight breaks out. Shizune is angry at Lilly for not turning in her budget before the deadline. Lilly explains calmly how there was too much work to do in that amount of time, and several students got sick. It is clear they don't like each other, and this kind of argument has happened before. Shizune then tries to involve Hisao into the argument, accusing him of slacking off as a joke. His response has a strong influence on which girl he gets closer to later on.

Hisao spends the rest of the day in class as usual while Shizune stays late to iron out some festival details with other students. She complains how none of the students have enough appreciation for their leadership. Hanako stops by and asks for Lilly.

If Hisao likes Shizune enough, he helps her and Misha with their festival projects (after a great deal of verbal sparring). They eat delivered food and work late building stalls. Hisao finally agrees to join Student Council before leaving for the night.

If Hisao likes Lilly enough, he takes Hanako to Lilly's classroom (3-2). They volunteer to help with their festival preparations. Being able to see, Hisao being there is a tremendous advantage, since 3-2 is for the visually impaired. Kenji is there too, but barely acknowledges Hisao's presence. They spend the day painting stalls, and he learns that Lilly and Shizune have a back story behind their enmity.

If Hisao doesn't like either girl enough, he sees Rin as he is heading to the dorms. He stops to help her with the mural, as the painting is tiring on her legs. They talk about the meaning of art and a boy in her class that is blind, but still paints. He asks her to dinner, but she declines. He leaves her still painting.

If Hisao agrees to go running, he meets Emi at the track again and goes for a jog. She provokes him into a race, but he gets a heart murmur and collapses. Emi helps him to the nurse, where she gets a talking-to. Emi invites him to lunch to make up for it. Hisao spends the first part of the day in the infirmary recuperating. Otherwise, he goes to class as normal (possibly encountering Shizune and Misha at his door in the morning). After this, one of two things happens.

In one scenario, Hisao goes to lunch with either Shizune and Misha, eating boxed lunch in a classroom while working on Student Council stuff. They keep him halfway into the first class, laughing at their little trick.

In the other scenario, Hisao joins Emi and Rin on the roof. Emi talks non-stop while Rin says little in her quasi-stoic way. Afterwards, Hisao may go into town, where he finds Lilly and helps her with her shopping. On the way back, they run into Rin who is standing in front of the mural, freaking out in her own special way. She seems to have creative paralysis, but there's nothing they can do to help her.

If Hisao is in the Shizune scenario, it continues to this day, where the duo are there immediately at his door in the morning. They ask him to skip class with them and go to the Shanghai. Hisao feels like he has no choice and agrees. They bicker and tease him about his choice of coffee over tea. Time passes and they manipulate Hisao into betting on something, but has no idea what, thanks to their way of communicating. Shizune and Hisao end up escaping, leaving Misha with the bill. When all three reunite, it is in the Student Council room, where they work on the last of the festival activities. Shizune invites him to the festival and Hisao agrees.

If Hisao is not in the Shizune scenario, he attends Saturday session as normal. He may go for a walk into town and find Lilly at the Shanghai with her sister Akira, who is relaxed, laid-back, and a bit irresponsible despite her formal appearance and career as a lawyer. Alternatively, he may go to the library where Hanako is and spend the rest of the day reading with her. Otherwise, Emi may grab him and use him for help getting art supplies for Rin, who is still working on the mural. She runs out of Prussian Blue paint and either Emi goes alone to fetch some, or she takes Hisao with her. If the former happens, Rin's art teacher stops by and Hisao asks to join the art club. If the latter, Emi gets Hisao to agree to a physical training regimen with her.

If Hisao did not demonstrate interest in any of the girls, Kenji invites him to go to the roof for a "manly" picnic. They spend the festival passing a whiskey bottle between each other. Hours pass while Kenji continously rants and Hisao drunkenly listens, lamenting that he should have asked a girl out and that he squandered all his opportunities. He ends up accidentally falling off the roof to his death (this is a joke ending).

Community content is available under CC-BY-SA unless otherwise noted.
Advertisement